NEW ORLEANS — The New Horizons team may get more than it bargained for with its next target. Currently known as 2014 MU69, the object might, in fact, be two rocks orbiting each other — and those rocks may themselves host a small moon.

MU69 orbits the sun in the Kuiper Belt, a region more than 6.5 billion kilometers from Earth. That distance makes it difficult to get pictures of the object directly. But last summer, scientists positioned telescopes around the globe to catch sight of MU69’s shadow as it passed in front of a distant background star (SN Online: 7/20/17), a cosmic coincidence known as an occultation.

Analyzing that flickering starlight raised the idea that MU69 might have two lobes, like a peanut, or might even be a pair of distinct objects. Whatever its shape, MU69 is not spherical and may not be alone, team members reported in a news conference on December 12 at the fall meeting of the American Geophysical Union.

Another stellar flicker sighting raised the prospect of a moon. On July 10, NASA’s airborne Stratospheric Observatory for Infrared Astronomy observed MU69 pass in front of a different star (SN: 3/19/16, p. 4). SOFIA saw what looked like a new, shorter dip in the star’s light. Comparing that data with orbit calculations from the European Space Agency’s Gaia spacecraft suggested that the blip could be another object around MU69.

A double object with a smaller moon could explain why MU69 sometimes shifts its position from where scientists expect it to be during occultations, said New Horizons team member Marc Buie of the Southwest Research Institute in Boulder, Colo.

The true shape will soon be revealed. The New Horizons spacecraft set its sights on the small space rock after flying past Pluto in 2015, and will fly past MU69 on January 1, 2019.

Wink and a nod

In June and July 2017, scientists looked for MU69’s path to cross in front of a star and block its light. The colored lines represent the paths of the stars moving behind MU69 as observed by different telescopes around the world. Some of these dips in light showed that MU69 (illustrated) might be shaped like a peanut, and one light blocking detected July 10 suggested the Kuiper Belt object has a tiny companion. 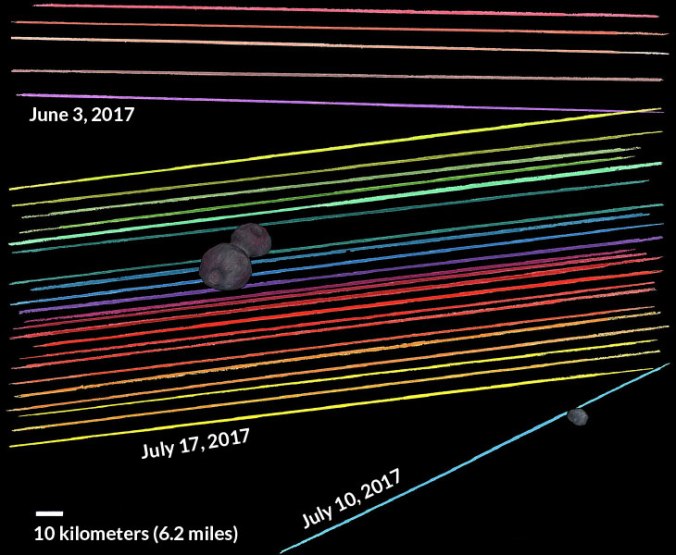