Iraq has announced that its war against so-called Islamic State is over.

Prime Minister Haider al-Abadi told a conference in Baghdad that Iraqi troops were now in complete control of the Iraqi-Syrian border.

A boy rides his bike past destroyed cars and houses in a neighborhood recently liberated by Iraqi security forces, on the western side of Mosul, Iraq, Sunday, March 19, 2017. The battle for western Mosul, including the narrow alleyways of the old city, looks to be the most devastating yet for Iraqi civilians trapped between advancing troops and increasingly desperate Islamic State militants. An estimated 750 civilians have been killed or wounded since the push to retake the western half of the city began in late January, and more than 100,000 have fled. (AP Photo/Felipe Dana) 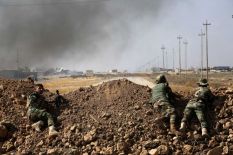 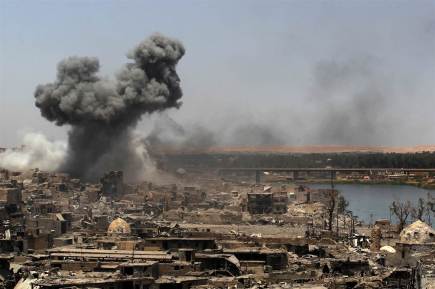 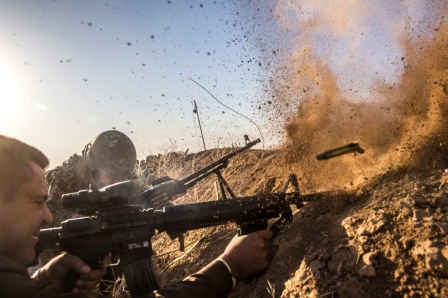 Recapturing Mosul was the bloodiest conflict – for both combatants and civilians

The border zone contained the last few areas IS held, following its loss of the town of Rawa in November.

The Iraqi announcement comes two days after the Russian military declared it had accomplished its mission of defeating IS in neighbouring Syria.

This is undeniably a proud moment for Mr Abadi – a victory that once looked like it might only ever be rhetorical rather than real.

But if the direct military war with IS in Iraq is genuinely over, and the country’s elite forces can now step back after a conflict that’s taken a huge toll on them, it doesn’t mean the battle against the group’s ideology or its ability to stage an insurgency is finished – whether in Iraq, Syria or the wider world.

Attacks may be at a lower level than they once were, but Iraqi towns and cities still fall prey to suicide bombers, while the conditions that fuelled the growth of jihadism remain – even in the territory that’s been recaptured.

Mr Abadi said on Saturday: “Our forces are in complete control of the Iraqi-Syrian border and I therefore announce the end of the war against Daesh [IS].

“Our enemy wanted to kill our civilisation, but we have won through our unity and our determination. We have triumphed in little time.”

The Iraqi armed forces issued a statement saying Iraq had been “totally liberated” from IS.

On Thursday, the head of the Russian general staff’s operations, Col-Gen Sergei Rudskoi, said: “The mission to defeat bandit units of the Islamic State terrorist organisation on the territory of Syria, carried out by the armed forces of the Russian Federation, has been accomplished.”

He said Russia’s military presence in Syria would now concentrate on preserving ceasefires and restoring peace.

The collapse of IS has raised fears that its foreign fighters will escape over Syria’s borders to carry out more attacks abroad.

Iraq’s war with IS 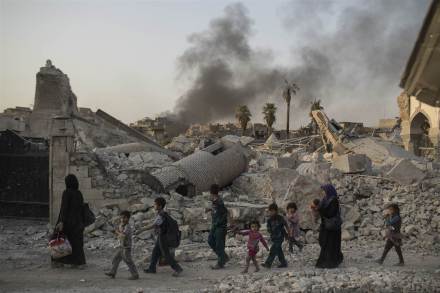 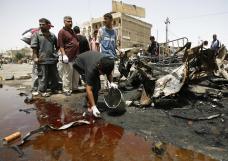 Baghdad, IRAQ: An Iraqi searches for body parts in a pool of blood and sewage at the site of a powerful car bomb which exploded in a Baghdad market, 06 May 2007. The blast sent shrapnel scything through a crowd in the Bayaa neighbourhood, a mainly Shiite district lying on one of the city’s many dangerous sectarian faultlines, killing at least 20 people and wounding 45 more. AFP PHOTO / AHMAD AL-RUBAYE (Photo credit should read AHMAD AL-RUBAYE/AFP/Getty Images) 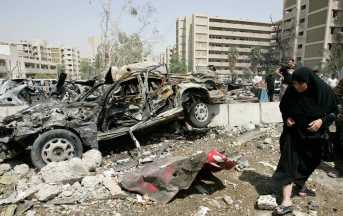 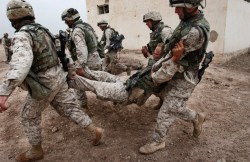 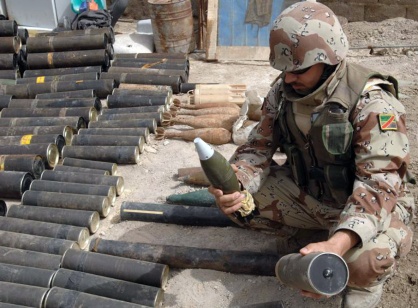