Senate Republicans narrowly passed a bill to overhaul the American tax system in the wee hours of Saturday morning, navigating party fractures to approve a plan that lawmakers were still scraping together in the hours before the vote.

With the 51-49 vote, the GOP leaps closer to its promise of dramatically remaking U.S. tax law under a Republican-led government. Republicans see changing the tax code as crucial to their electoral success after GOP opposition sank attempts to repeal the Affordable Care Act.

The GOP still needs to overcome significant disagreements for the House and Senate to craft a joint bill and send it to President Donald Trump’s desk. Republicans hope to reach a deal by Christmas, a quick timeline considering the differences in their plans.

Following the vote, Trump tweeted that Republicans were “one step closer to delivering MASSIVE tax cuts” and said he wanted to sign a bill by Christmas.

Last-minute changes to the Senate plan won over multiple skeptical Republicans on Friday, a day after a policy roadblock threatened to slow the bill’s momentum. The GOP did not release the final version of the broadly unpopular bill until Friday night.

The surprise GOP “no” votes to sink the party’s policy goal never surfaced, unlike in September when Sen. John McCain, R-Ariz., turned his thumb down on the Senate floor to quash Republican hopes of repealing Obamacare.

A GOP sprint to finish and approve the bill sparked backlash from Democrats, who shared videos of themselves parsing through the 479-page legislative text, which featured handwritten changes. Senate Minority Leader Chuck Schumer, D-N.Y., accused his counterparts of “descending to a new low of chicanery.”

“You complain about process when you’re losing, and that’s what you heard on the floor tonight,” he said.

Republican leaders had to balance varying concerns within the party to approve the plan. Multiple senators had fears about the estimated $1 trillion in budget deficits an earlier version of the bill would generate, even after economic growth is taken into account. Only one of those lawmakers, outgoing Sen. Bob Corker, R-Tenn., ended up opposing the plan.

After the bill’s passage, McConnell said he was “totally confident” it would be revenue neutral or even increase the amount of revenue the government holds. The official congressional scorekeeper estimated it would come nowhere close to generating revenue.

The bill would now also include a form of the alternative minimum tax, which the initial plan scrapped.

Senate Republicans balanced those sometimes competing concerns, along with Senate budget rules, without losing three senators, which would have killed the legislation. Doing so took some unpopular moves.

Most individual tax reductions under the plan would expire within a decade. A corporate tax cut to 20 percent from 35 percent will be permanent.
Democrats seized on those provisions. They cited them as more evidence that the bill helps corporations and wealthy individuals at the expense of low- and middle-income taxpayers.

The Senate also voted to scrap Obamacare’s individual mandate, which would lead to roughly 13 million more people uninsured and average premiums rising about 10 percent, according to Congressional Budget Office estimates. The measure saved more than $300 billion to allow senators to cut taxes more deeply and stay within budget rules.

All three GOP senators who knocked down Obamacare repeal — McCain, Collins and Sen. Lisa Murkowski, R-Alaska — ended up backing a tax bill that would repeal the mandate.

The Senate and House will now likely go to a conference committee. Lawmakers will aim to craft a joint bill that both chambers can pass.

The chambers will face a challenge in coming to a consensus on several key policies. Importantly, the Senate — only hours before the vote — added up to $10,000 in state and local property tax deductions to its plan, matching the House bill. 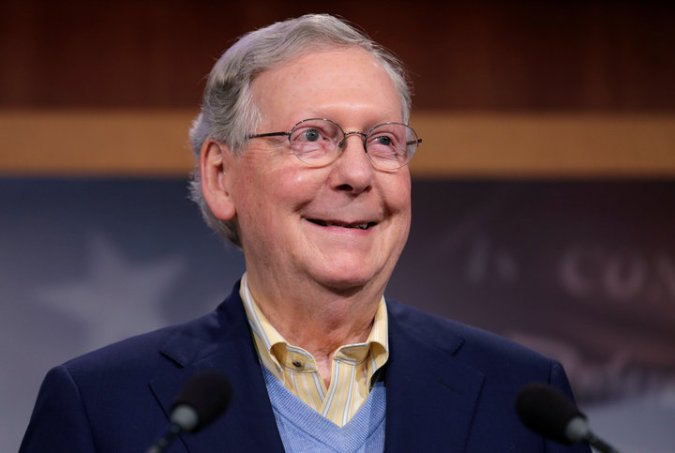 GOP House members in high-tax blue states largely oppose scrapping the popular provisions, which the initial Senate proposal would have done. Senate Republicans, who have no members representing states like New York, New Jersey and California, have no such political dilemma.

Thirteen Republicans — all of whom represent New York, New Jersey or California — voted against that House plan.

The chambers will have to resolve differences in the number of tax brackets and the rates income groups pay. They will need to settle differences on how to treat pass-through businesses, the estate or so-called “death” tax and the mortgage interest deductions.

While attempting to agree on a plan, Republicans will also have to face a public opinion problem. Forty-nine percent of people aware of the tax proposal opposed it, while only 29 percent said they supported it, according to a Reuters/Ipsos poll released Wednesday.

Earlier in November, 61 percent of voters said the plan would mainly help the wealthy, according to a Quinnipiac poll. Fifty-nine percent responded that it favored the rich at the expense of the middle class.

Only 44 percent of taxpayers would see their taxes fall by more than $500 in 2019, according to an analysis by the congressional scorekeeper Joint Committee on Taxation shared with The Washington Post. By 2027, when most individual reductions expire, only 16 percent of Americans would have taxes cut by more than $100, the committee projected.