Terrifying footage has captured the moment a driver mounted a pavement and mowed down pedestrians before being shot dead as he tried to stab police with a knife.

Horrified bystanders can be seen diving for cover as the motorist ploughs through a pedestrianised boardwalk as shoppers browsed a market in Lages, a town in the southern state of Santa Catarina. 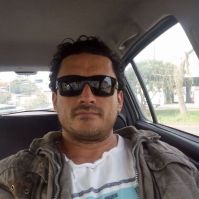 The driver has been identified locally as Giovanni Oliveira Fornari, 41, from Ponta Grossa in the state of Parana, according to Brazilian media

Six people were struck by the car before the driver was shot dead when he tried to attack police with a knife after officers surrounded him.

Brazilian police said the motive for the attack is unclear at this stage but have not ruled out that it was a terrorist act.

One of the people run over, a 33-year-old woman named as Janaina Antunes Correia, is said to be “serious.”

The others, who include a police officer hit while he was on his motorbike, are not believed to have been seriously injured.

A 29-year-old woman, a 46-year-old man and military police officer Joel Alves de Souza are among the other victims.

Fornari was at the wheel of a Renault Sandero. The incident happened in the centre of Lages around 2pm local time yesterday.

Brazilian authorities cancelled plans for an official Christmas opening in the city after the drama.

The driver has been identified locally as Giovanni Oliveira Fornari, 41, from Ponta Grossa in the state of Parana, according to Brazilian media.

He is not thought to have a criminal record.

He died after being taken to hospital with a gunshot wound to his abdomen.

Police chief Frederick Ramsbusch, speaking before Fornari died in hospital, said: “The author of this crime was intercepted immediately but tried to attack police with a knife.

“Because of his aggressiveness, he had to be reduced using a firearm. He was shot and is being taken to hospital.

“We haven’t got enough information at the moment to characterise this as an act of terrorism. We need to obtain more information to be able to determine what led this person to commit this crime.”

Locals took to his Facebook page afterwards to insult the driver.