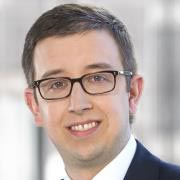 Investors will have to be careful next year as potential stalling economies in the U.S. and China, along with rising global inflation and tighter monetary policy, could make for a “tricky” 2018, according to Morgan Stanley.

Andrew Sheets, chief cross-asset strategist at Morgan Stanley, said in a note Sunday he expects U.S. economic growth to moderate as the economy moves deeper into the later innings of the current economic cycle. In China, Sheets expects the economy to slow down amid policy uncertainty.

The U.S. and Chinese economies have grown at a strong pace in 2017. In the U.S., annualized GDP has grown at least 3 percent in each of the past two quarters. In China, GDP growth has remained well above 6.5 percent this year.

Sheets remains optimistic in the global economy so long as economies like Brazil and India pick up the slack, “but this handoff will likely be tricky, and occurs against a backdrop of rising core inflation and less accommodation.”

Core inflation, which excludes food and energy costs from overall inflation measures, is expected to rise in the U.S. next year, Sheets said. Overall inflation in China, meanwhile, is set to rise to 2.6 percent by fourth quarter 2018 from 2 percent this quarter, said Sheets.

Monetary policy, meanwhile, is expected to tighten around the world next year. The Federal Reserve has forecast three interest-rate increases in the U.S. next year, and the European Central Bank is likely to start rolling back its asset purchasing program. The Bank of Japan is also expected to fine-tune its yield-curve control policy.

“We’d note that all this will occur at a time when markets have rarely been so confident about the predictability of the policy outlook,” said Sheets.
Central banks have been more prone to telegraphing their monetary policy decisions to financial-market participants in recent years, especially following the financial crisis.

Sheets recommends investors prepare themselves for this handoff by selling U.S. corporate bonds in favor of their European counterparts, which are better in quality and have low volatility.

He also recommends investors stay in global equities until the first quarter of 2018, when “a better exit point” could present itself. Conditions are still supportive for stocks near term, he said.

On a more specific basis, Sheets says investors should buy energy stocks as they have “consistently outperformed in late-cycle environments” and should dump consumer stocks, which face “poor revisions, more structural disruption and is often a late-cycle underperformer.” Energy is the second-worst-performing sector in the S&P 500 in 2017, falling 10.8 percent. Consumer stocks, in turn, are up 14.4 percent.