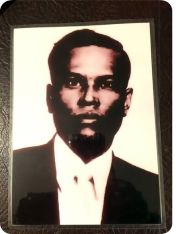 A killer who spent 41 years on the run has finally been jailed for murdering his boss in a knife attack.

Riasat Khan, 63, stabbed businessman Kazi Ahmad seven times in the neck and chest in October 1978 and then fled the UK before returning years later.

He was finally caught in May last year when he tried to board a passenger jet at Birmingham airport.

During his trial Khan had claimed he killed the 41-year-old dad-of-four in self-defence after rebutting sexual advances.

But police found no evidence that the murder was motivated by sex, the Daily Record reports.

At the High Court in Glasgow, Lord Beckett gave Khan a life sentence and said he must serve at least 16 years in prison for the Aberdeen businessman’s murder.

The judge added: “Justice has been delayed but justice has not been denied.”

Kazi’s granddaughter, Aysha Begum, 27, who hadn’t been born yet when he was murdered, said last night: “As a family, we are very happy that justice has finally been served.

“Khan has never shown a bit of remorse for what he did to a person who took him in and looked after him.

“His lawyer tried to apologise on his behalf but it wasn’t sincere – he was more worried about himself than how we felt.

“We will never forgive him for the things he said about my grandfather during the trial and we are very happy that Lord Beckett chose not to believe him too – that is especially important for us.

“We put our faith in the police and justice system. They didn’t let us down and for that we are hugely thankful.

“This result is not just for us but for everyone in the local community who adored and valued my grandfather.”

He enjoyed sharing his success at the tables with his staff and Khan, then 24, began to accompany him to the city’s gambling joints.

After the murder at the staff flat in the city, Khan fled to Edinburgh and blew £900 at a betting shop.

He then disappeared, travelling through France, Italy and to Greece.

He came back to the UK from Pakistan in the 1990s and was snared in May 2016 trying to board a flight at Birmingham.

Passing sentence, Lord Beckett said: “The excellent work done by police officers, forensic scientists and pathologists in 1978 stood the test of time, leading to your conviction in 2017.

“Had you been arrested in 1978, you may well have been released by now.

“Instead, your actions have allowed you to spend the best years of your adult life in freedom.”